The blog is finished!

It's taken a few months, but I have finally finished our SKI blog. You can read it below in reverse chronological order, because I wrote it as a day by day account. Ignore the actual dates of the posts, the real dates are in the blog titles.

Last day, we had said goodbye to Andrew the night before, so we set off via Reefton to Maruia springs for a dip in the hot pools. Last time we had been here they had been wonderful, clean and hot. This time they were a real disappointment, they were slimey underfoot, the water was black with some sort of algae or similar and they weren't very hot either! So we compensated with an ice cream, and went off to Maruia Falls. This is quite spectacular, a very large volume of water pouring over them, with a massive swirl of logs trapped at the base. 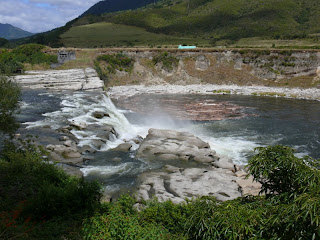 We had a stop at Murchison on the way back for a coffee, and a visit to the local museum, and then on to Picton. The vineyards down the valley heading towards Blenhiem are spreading at a heck of a rate, and seem to go on forever.

At Picton, we went for a walk alongside the harbour on the Bob's Bay track, and back up onto the hills above the harbour in the Victoria Domain along the Harbour View track. Just a gentle stroll to finish off a week of great walking. And we got to see our ferry home coming into the harbour. 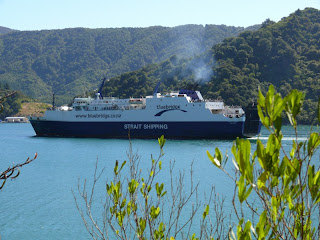 The crossing home was reasonably uneventful, it got a bit foggy in the middle of the strait as dusk was coming on, and we got a distant view of the Queen Victoria Liner, which had just left Wellington Harbour on it's round the world cruise. 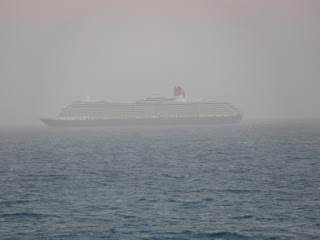 Home at last to our own comfortable bed!
Posted by Dave at 8:13 PM 1 comment:

Today we were intending to drive to Greymouth to see Andrew again, to make sure everything was OK before we headed back across the strait to Wellington. A bit of a departure from out usual day, as we were going to have two driving sessions, and a single walk in the middle of the day. So the first part of the day was taken up with the drive to Arthur's pass via the Porter's Pass and Castle Hill area. We arrived Arthur's pass at lunchtime, and stopped at Arthur's Hotel where we had a late breakfast type meal. Very nice!

There were two nice walks signposted from the village centre, the first to the Devil's Punchbowl falls. This was a fairly short but quite steep trek up boardwalks and stairs (I hate stairs up the sides of hills, it defeats the purpose of going out for a walk!) to quite a scenic waterfall. This photo is a vertical panorama, so click on it to see it properly.

On the way down from the Devil's Punchbowl, the path to the Bridal Veil falls heads off up the main valley to the right. This is a much more natural path, with a few steps built into it, but is quite a nice one hour return walk. At one point it drops down very steeply to cross a stream, and climbs very steeply up the other side. Quite a scramble for a fat old man! I think this path was put in to service the power lines which run overhead for most of the second half of the walk. The path eventually joins the main state highway, so we turned around and retraced our steps. The old power station back at Arthur's pass village was worth a visit too. 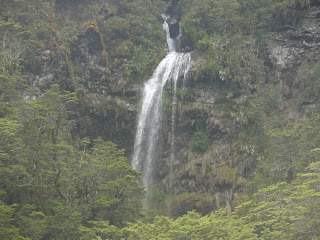 So not a very exciting days walking, but I think we were getting tired by the time we got to Arthur's Pass, so it was about all we were up for!
The drive to Greymouth was fun, and eventually we got back into countryside we were quite familiar with. It was like going home!
We stayed at the Greymouth Top Ten holiday park, camping next to the beach. Andrew was fine, he seemed pleased to be taken out for a meal at a hotel, but after a quick walk we dropped him off at his apartment, and we went off to our tent for a nights sleep!

So after a wet but comfortable night, we packed everything up and headed back to Mt Cook village, for another visit to the information centre, where I bought a merino hat and some polyprop gloves and a map of the area. This brought our kit up to the standard we needed for the walk we had planned up to the Hooker Glacier. This is quite a long walk, but is quite 'touristy', being for the most part a well made track, with board walks and swing bridges etc. 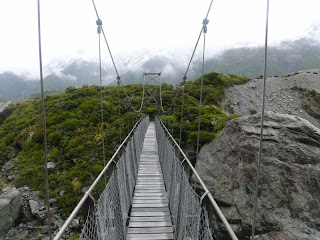 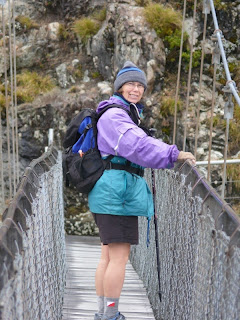 Along the way we saw some superb examples of NZ alpine plants and flowers. 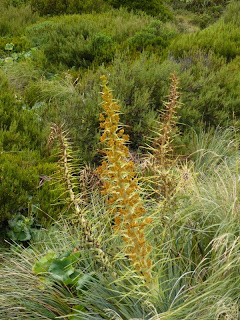 It was a bit of a grey bleak day at first, so there weren't many good shots of the glacier, and as the glacier is retreating we didn't actually get that close. So I have included a picture of me to make up for it! 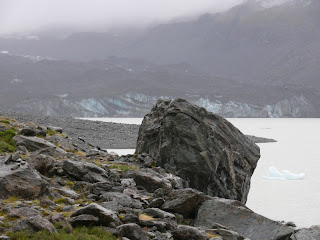 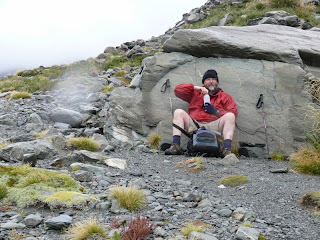 The weather cleared up on the way back, and we started to get some superb views of the mountains around, and the various glaciers. This one is high up on the side of Mt Sefton (3151metres). 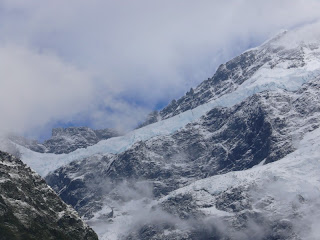 We had a light lunch at a cafe in Mt Cook village, and then set off to Tekapo.

When we had arrived at Mt Cook, the tops had been a bit bare of snow, but the night of rain at campsite level, was a night of snow just a couple of hundred metres higher, and the tops were a picture on the way out of the Lake Pukaki valley. 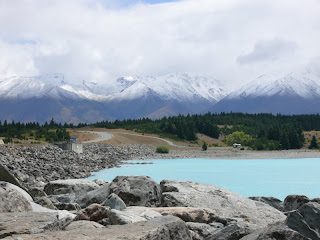 At Tekapo, we visited the Mt John observatory. The main activity at Mt John is a joint venture between Nagoya University and several NZ Universities (Auckland, Canterbury, Massey and Victoria in Wellington) called the Japan-New Zealand MOA group (Microlensing Observations in Astrophysics). They use the gravitational effects of massive objects to detect planets around other systems in the Universe. We were given an excellent guided tour of the facility, and we had a cup of coffee and a cake!

The rest of the day was taken up with driving via Fairlie to Geraldine, where we had a meal of the most disgusting fish and chips ever. We had parked opposite the town's real fish and chip shop and not seen it, and ended up at a chinese takeaway. What a mistake!

We stayed in a cabin at the Mt Somner holiday park. Fairly cheap, but not up to much! Not a good nights sleep!
Posted by Dave at 6:00 PM No comments:

I didn't have a comfortable night on my foam mat in our little tent, so I decided to do something about it. But first, we packed up the car and set off for an early morning walk up Mount Iron on the outskirts of Wanaka. 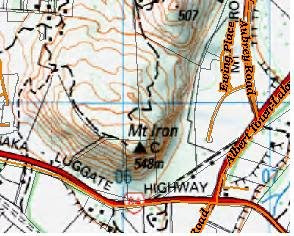 Not a huge walk to the top (about 248 metres up from the road, about 548metres above sea level) but it got the heart going a bit. Nice views over Lake Wanaka, Lake Hawea, the town, and of the surrounding countryside. This picture of Wanaka was taken on the way up the hill. 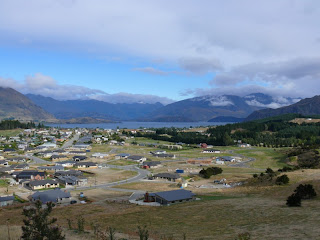 The two panoramas were taken from the top, the first is North to South going clockwise, and the second South to North continuing around.

An exciting walk down the steep side of the hill contrasted with the gentle walk to the top, and 90 minutes or so after we set off we were back at the car. We dashed back into Wanaka, and bought some supplies for the day at the supermarket, and then across the road to Mainly Tramping, where I bought a self inflating mat, full length and quite a thick one. Not something I would ever take on a long walk, but great for camping from the car which we do a lot of.
So back on the road again for a longish drive to Mt Cook. We set off down the north and east side of the Clutha River to Tarras, then headed north up the Lindis river to the Lindis Pass. Not one of the more dramatic passes in New Zealand, but definitely one of the nicest drives. We had a beautiful day for it, and stopped at the top of the pass for our lunch, and were joined by the obligatory tourist buses! A quick photo and we were off again. This small panorama (3 pictures) was taken from the summit looking North.

Next stop Twizel, after a picturesque drive across the exceedingly flat McKenzie Country plains, surrounded by some exceedingly high mountains. We found a nice little Cafe/restaurant on the way into Twizel, Poppies Cafe. Beautiful coffee and excellent food. We only had a desert as we had a nice evening meal to look forward to, but one day we will go back for a full meal!
Swiftly on to our overnight stop at the Glentanner Motorcamp a short drive south of Mount Cook village. This campsite has great facilities, but the site seems completely undeveloped. So you find yourself a patch of grass amongst the scrub and rocks, and pitch your tent, which is what we did. The campsite overlooks Lake Pukaki, which is a mostly natural reservoir for the power station at Twizel. It's fed by the glaciers in the Mt Cook national park, and is the most amazing blue. It's level was a bit down when we got there, as this summer had been long, hot and dry down here in the McKenzie Country, and the reservoirs had not recovered after the winter power usage. We couldn't actually get a photo that does this lake justice, so here is the Wikipedia entry for it, and I am sure this chap won't mind me linking to his website, which contains a stunning photo of the lake.
We had a few hours to spare before our evening meal etc, so we drove up to Mount Cook, and then onto the Tasman Glacier viewpoint. This is a few kilometres down a dirt road, and then a couple of kilometres walking, but it is quite spectacular, and as the glacier is receding fairly rapidly, we took our chance to see it while we could. 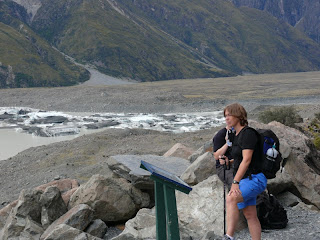 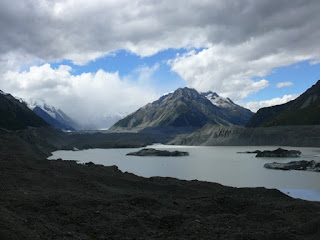 A panorama of the lake, there are 3 tiny orange blobs in this picture which are 12 seater tourist boats. They give the chunks of ice some scale!

We spent some time at the visitor centre at Mt. Cook village, and the weather cleared a little while we were there (it had rained and got very cold while up at the Tasman Glacier) and we got some nice shots of the Mountain through the window! 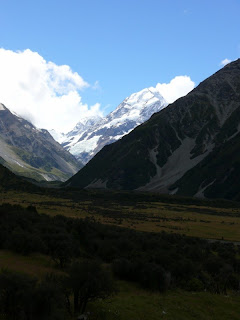 Back to the campsite, some pasta and sauce for our evening meal, and more photo opportunities from outside the kitchen window! 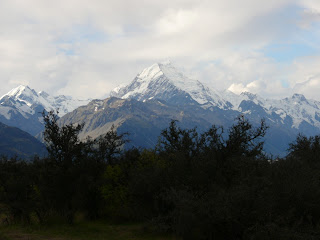 And to top off a wonderful day, while enjoying a stroll around the wilderness that passed for a camp ground, we saw a New Zealand Falcon hunting amongst the bushes of the campsite!
Off to a much more comfortable night, but it rained as it only can in the mountains overnight, and as we were still learning how to put the tent up, we got a little wet around the shoulders where we touched the tent!