Nice early start from the motel on this the first real day of our holiday. We had breakfast at the Cafe Paris, just coffee and croissant with butter and jam. Even at 7:30 - 8:00 am, there were tourists arriving at the Jade factory opposite, probably their first stop of a long and varied day. More on early morning tourists tomorrow! As we sat outside the cafe, we looked south and got our first view of Aoraki Mount Cook. 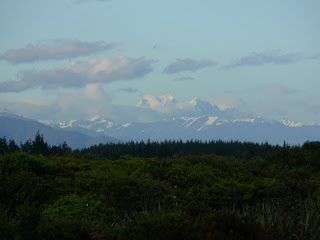 A relatively short drive to our first stop of the day, away from Hokitika to the south this time. We parked up at Okarito Township, a lovely little place about 15-20k off the main highway, about 120k south of Hokitika. It used to be a sea port of some importance in the early days of New Zealand, when the West Coast was the wild west of NZ. Its unreliable harbour which needed regularly digging out and blasting out put paid to that. Now the Okarito lagoon is home to the beautiful Kotuku, or White Heron, which only nests here in the lagoon. Another Kotuku, the Royal Spoonbill also nests here, and we have a colony of those near our home in Whitby.
We were not here to go bird watching this time, but to do a walk to Three Mile Lagoon to the south of Okarito. There are two routes, an inland 'Pack' track, used by pack horses to carry supplies south in those wild west days presumably, and a coastal route which is passable at lower tides. We did not know about this second alternative when we set out, so did not check the tide tables.
Any way, these pack horses were obviously tough little buggers, as the route out of the township was quite sharply up a ridge line. About half way up, there is a spur path off up to a trig point, some 250m above sea level, which we took the opportunity to visit, where there were stunning views of the Okarito lagoon to the north, the mountains inland to the east, and the wild coast to the south where we were heading. 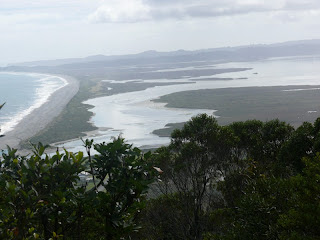 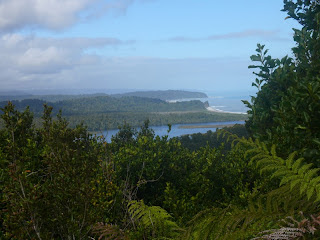 South to Three mile lagoon from trig point
The rest of the path after the trig was through native bush, along spurs and ridge lines, rising up to about 250 metres. So when we started dropping down to the lagoon we were quite pleased. We didn't stop at the lagoon, but continued round to the beach, where we decided that the tide looked far enough out to walk back along the beach, especially as people were walking along towards us from Okarito. Lynn was a little worried, but there was only one place we had to scramble over some rocks to avoid the sea, so it was no problem.
Two examples of the wildlife found on the beach can be seen in these two photographs! 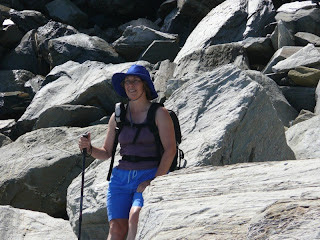 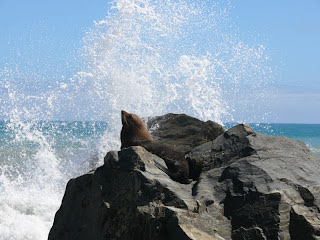 So back to the car after a wonderful 9km or so walk, and off we went to go to Franz Joseph Glacier. Just as we driving past the lagoon, Lynn spotted a Kotuku fishing just off the shore, the first we had seen, but I didn't think to stop to get a photo!

We got to Franz Joseph at about lunchtime, so we stopped and had a cup of tea and shared an apple for lunch (OK, we had had some hot pork sandwiches whilst on the beach) and then set off to do some walking at the Glacier. We had planned to do something big, but the path to Roberts Point was closed because of land slips, so we just decided to do the walk to the Glacier face. We have done this a few times before, but as the Glacier is always changing, and the river changes course with every major rainstorm (which are common on the west coast) its a different walk every time!

It was a good walk as usual, it was nice to leave the tourists behind at the rope barrier beyond which only those properly equipped and experienced should venture. Didn't stop people in jandals (flip flops) walking up the face though! The obligatory photos were taken! Its difficult to show the scale of the glacier. I suppose it rises in the distance to about 2500-3000 metres. There's a chap in the first photo who is about 1 km from the face which may help give some scale. 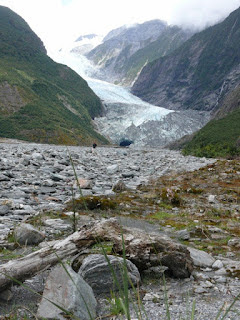 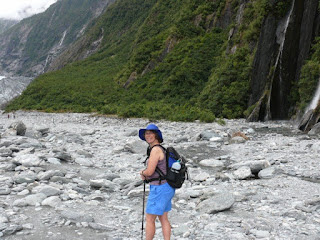 We headed south to Fox Glacier in the car. It was a bit late to do another walk, so we found the campsite, which was very nice, good new facilities etc, pitched our little tent, went off and found a shop where we bought some frozen Lasagne and some veges for out evening meal, had dinner and a stroll and went to our sleeping bags. The sound of the Fox Glacier river a few hundred metres away was quite soothing, but the possum in the tree by our tent, that systematically destroyed the top half of the tree over most of the night, very noisily, was not soothing at all! I am too old for sleeping in small tents on thin foam mats!
Posted by Dave at 6:43 PM