Day five was an early start, everything down and packed away by about 7:15 (sorry rest of campsite!) showers and breakfast to follow, then off for our first walk of the day at Fox Glacier. Its not long since we last did this, so it was all quite familiar. I think we were first to the car park, by about 30 seconds. By the time we had our walking gear sorted, another 3 cars had pulled up, and before we left the car park, the first tour bus was arriving!
We had a quick walk up to the face area of the glacier, mainly to stay ahead of the rest of the tourists. The path has changed again nearer the glacier, and stays quite low with a well made path. Had a few minutes to ourselves, when the first grockle caught up, who decided he was going to go past the rope barrier and touch the ice! Still, he provided some scale for the next picture. 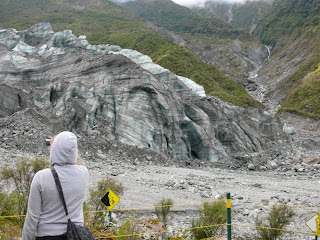 If this is you (below) you are a moron! 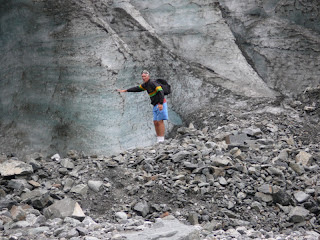 On the way back from the face, we unfortunately got mixed up in a busload of tourists, who seem to have got as far as they could in their allotted time, and were heading back, cameras flashing anyway! The most noticeable thing about these people, besides the number of northern english accents, was the smell. They were obviously all freshly showered and wearing their strongest deodorants ready for the rigours of the day! An unusual form of pollution. 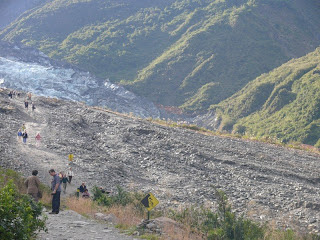 So, first bit of exercise over for the day, we were back in the car and heading south, into uncharted territory. We had never been south of Fox Glacier before, so it was starting to get a bit exiting!
The drive to Haast is very different to what I was expecting. A cursory glance at the map showed a relatively easy coastal drive. Boy was I wrong. It was mostly inland, went very high in places, and was by no means straight! It was very nice though and the car managed it very well. Haast itself has a quite nice visitors centre, but the rest of it appeared closed. So we decided not to stop for coffee, and carried on into the Haast Pass. There are parts of this which are actually quite spectacular, but I don't think I was in the mood for it. Five out of every six vehicles was a camper van, and the rest were tourist coaches! Of course there is still plenty of room for everyone (this is New Zealand after all) but it was a bit depressing!
We stopped at a lay-by to use the facilities and have some soup, and finally came across the famous west coast sand flies, notably absent until now. Unfortunately, they had a lower opinion of Haast than I did, and tried to hitch a lift out of there in our car, our clothes, our hair and have a bit of a meal off us to boot! A quick spay of insect repellant over everything in the car added an interesting smell to the rest of the journey, but minimised the number of live sand flies to enough to keep me amused swatting them as I drove!
The other side of the pass down to Wanaka, past Lake Wanaka and Lake Hawea could not have been nicer. A beautiful drive through magnificent scenery, some of which we had seen before in the movie 'Goodbye Pork Pie', which made it even more interesting!
Wanaka is a bit like a British seaside resort, but with a lake instead of the sea. Its quite a busy little place, and has a good variety of shops and food outlets. We found a camp site for the night, threw up our tent, and went off for another walk.
We started at the lake side in the town centre, and walked around the south side of the lake for a few kilometres. Not especially exciting, but very pleasant after a long drive.
Ravioli and a pasta sauce for tea, and off to bed for a somewhat quieter night than the previous night, but just as uncomfortable. Definitely too old for a closed cell foam mat! We had a busy day planned for day six!
Posted by Dave at 8:05 PM